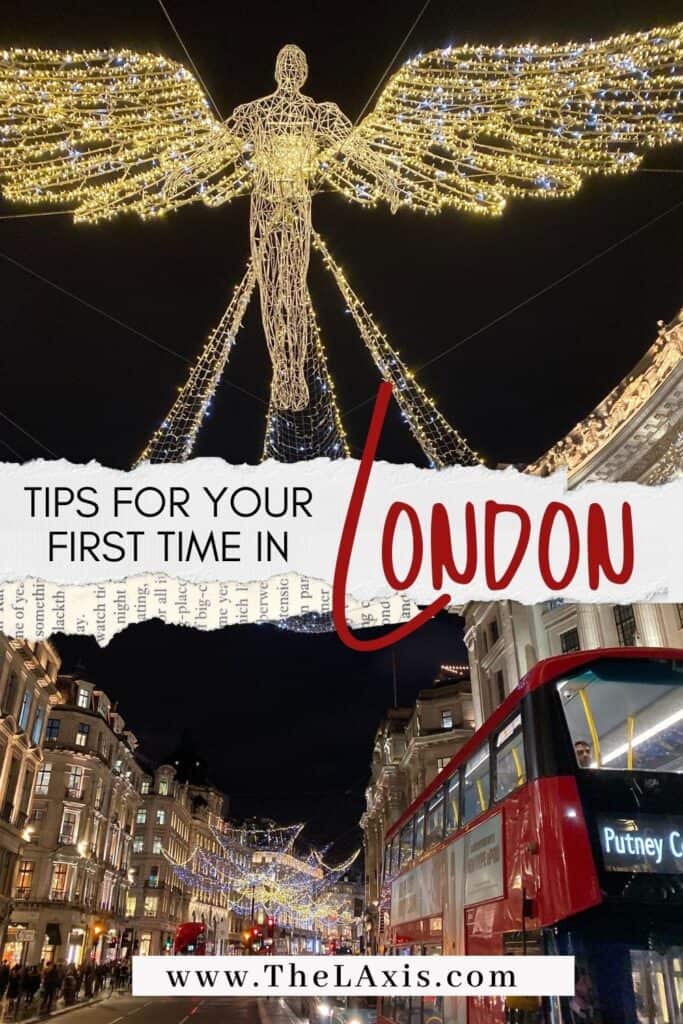 Visiting London for the first time? You are up for a romantic, iconic, elegant, vibrant, and mesmerizing experience. Unquestionably, this has been one of my favorite trips so far.

Last year we spent an entire week in the city during late November. It might sound like a lot of time but let me tell you…London is massive. Seven days is not nearly enough to do everything.

There is something for everyone and planning a trip to such a big metropolis can be overwhelming. Below is a mixture of my tips as well as favorite spots to help you make the best of your first time in the capital of England.

The Tube is the best way to get around in London

The London Underground, nicknamed the Tube, is one of the most effective transportation systems in the world.

We used Google maps to find the closets underground station and plan the routes. Trains are clean, safe, fast, and more importantly, punctual. We were able to go everywhere in London (including moving from and to the airport) using just their railways system.

All you need is an Oyster card. We bought ours at the airport and then re-loaded it as needed at the train stations. It’s essentially a pay-as-you-go electronic ticket. There is a £5 fee for the card, but overall, it’s cheaper than paying for one-way tickets since it offers daily capping. This means you can travel as much as you need in a single day and the amount you pay for the journeys is limited (capped). The card is also a valid payment method for buses, trams, and other forms of public transportations.

Keep it as a souvenir from your first time in London and re-use it whenever you are ready to go back. You can read all the official Oyster card details here.

Do not miss Piccadilly circus during your first time in London

During your first visit to London, make sure you do not miss the famous and iconic Piccadilly Circus. I guarantee you that it won’t disappoint. It is full of character and life! Missing it would be like going to New York City for the first time and skipping Times Square.

The square is located at the intersection of five busy streets. It is even more charming at night once its lights are on.

There are street artists performing in the area, and lots of shops, restaurants, bars, and cafés around. I won’t lie, it will seem a little touristic, but we stayed around the block at the Thistle Piccadilly for an entire week and did not get tired of it.

If you’re there around Christmas, wander around and explore the many Christmas Markets in the area. They’re quite an experience!

Beware of the currency exchange rates

The British pound sterling (GBP) is the official currency of the United Kingdom, and it is quite expensive! You cannot pay using your own currency in the UK, not even in Euros.

Make sure to bring a non-foreign fee credit or debit card, which is the easiest and most affordable way to pay in the UK.

Credit card companies apply the current exchange rate in effect when your payment is processed. The rate will go up and down, but it will always be a commercial rate—much better than the retail rates available over the counter to consumers.

While most cards are accepted in England, you should stick with the big two—VISA and MasterCard.

Trust me, you do not want to bring cash and buy your pounds in London. When we visited, 1 GBP was approximately ~ 1.29 USD, and we saw places selling pounds for as much as 1.83 USD. Just imagine!

We have a “currency collection” and we always like to get some local currency whenever we travel. We found the best rate in Bath; I believed it was 1.50, still pricy.

If you absolutely need to bring cash only, you are better off exchanging it through your bank before leaving home. That way you’ll get more value for your money.

Indulge in some afternoon tea

Afternoon tea is a national tradition in England and it was one of the best experiences from our first time in London. It’s not just about drinking tea. It’s the perfect and exotic combination of delicious finger food, elegant pastries, desserts, champagne and unlimited tea…all served in a very tasteful atmosphere!

According to my research, there are many popular options for afternoon tea in London, but we decided to go to Sketch.

The decision to visit Sketch was mainly based on its eccentricity.

The tea takes place in a modern pink gallery, where the walls are covered by some quirky and sarcastic prints. There are quips on the utensils and china, and its bathrooms (should I say loos?) are shaped like eggs.

Additionally, they have over 20 tea choices! If that’s not enough, there is a string quartet playing live music, and a caviar man who wears a Panama hat AND a pink suit. All in a live and fun atmosphere. Who needs more than that?

This, of course, comes with a price tag, but it’s money well-spent. Just come with plenty of time to justify it!

The changing of the guard at Buckingham palace is quite an elaborated and interesting royal ceremony, beautiful and organized. I wouldn’t miss it during a first time in London!

I loved how professional the band and the guards looked, and how precise the whole thing was. It’s also a great opportunity to admire the Buckingham palace and its surroundings.

Since it’s absolutely free, it’s also extremely popular and overcrowded. Regardless, everyone should plan to see it at least once.

Who knows, you might even spot the Queen while you wait…

Be prepared to spend 2-3 hours of your day. Most people will arrive at least an hour early to secure a good viewing point.

I highly suggest finding a spot facing the gate on the Victoria Memorial (the fountain near the gate) as this gives an elevated view of event. Check out the schedule as it only happens daily from May to July, otherwise on alternate days.

If you ask me to describe London using a color, my answer will be red.

Bright red everywhere, mainly due to the double-decker public buses that are an useful and colorful addition to the occasionally gloomy city.

We decided to randomly take one of these and just ride along until we either got bored or found a place we wanted to explore. You can use your Oyster card and find some interesting spots off the beaten path while appreciating more of the local life.

Just make sure your cellphone battery is full to be able to get directions back to your hotel. Secure a seat on the top deck for the ultimate experience!

Take a day trip and venture out of the city

If you have enough time and want to explore more of England, I highly recommend taking a day trip.

There are several towns just outside of London that will make for an easy and fascinating city break.

The most popular options seem to be Oxford, Windsor, Bath, the Cotswolds, Cambridge University town, Brighton and of course, mystic Stonehenge.

I wish we could have seen all of these and more during our first visit, but due to our limited time, we only took a day to venture out of London.

We decided to explore the country side with a tour of Stonehenge, Bath and the small and charming villages of Lacock and Avebury.

We’re the “DIY kind” and usually just self-drive to the locations, but given that Brits drive on the left side of the road, we decided to book a tour.

If you’re interested, we used England Experience Tours. They have a small and comfortable van instead of a large bus, and the itinerary was packed but very well allocated. I cannot recommend them enough, check out their impressive 5-stars Trip Advisor rating for more details.

The rain is not going to ruin your trip

It’s not secret, London has a reputation for its dreary, rainy weather. But reality is that it’s not that bad…depending on when you go, there is a high chance of not getting a drop of water during your visit!

London averages approximately 106 rainy days each year with a total of 23 inches (583.6 millimeters) of precipitation annually.

Now, let’s compare those numbers to one of the wettest cities in the US, Miami (where I live and where it’s been pouring for the past two weeks)!

Miami receives an average of 62 inches of precipitation annually and has an average of 128 rainy days. Told you, it is definitely not that bad in London!

Even if you visit during the wet season, there are plenty of things to do indoor.

Also, I can tell you from my experience in November, that the rain will make your first time in London a lot more memorable. The city looks even more charming when wet!

Make sure you check out the Tower Bridge

Okay, I know this at the top of the list of best things to do in London. But it is there for a reason! Make sure you do not miss it.

I can confidentially say that this was one of my favorite parts of the city…a mixture of old and new architecture, the promised London and a true English landmark.

We did not take the bridge tour, but honestly, just walking around makes for a great afternoon.

Get some fish and chips and visit right before sunset for an inexpensive and authentic “dinner with a view”.

Don’t ignore any of these well-known landmarks

I only mentioned Piccadilly Circus, the Changing of the Guard at the Buckingham palace & the Tower Bridge above. Those were among my favorite spots and some landmarks that I believe should not be missed during a first time in London.

But there is so much more to see!

Below is a list of other things we did and which did not disappointed.

Last but not least: don’t forget these little details…

View all posts by lianetthub 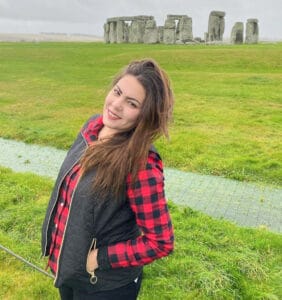 Hey, there! I’m Lianet, born and raised in Cuba, permanently living in sunny Miami, Fl—for now. I’m a passionate traveler, and that’s the main focus of The L Axis; but this is not just a travel blog. Join me as I document and share my experiences, lifestyle & interests with the world.

Don’t miss my next story!